Live theatre: What are the benefits for those in the seats? 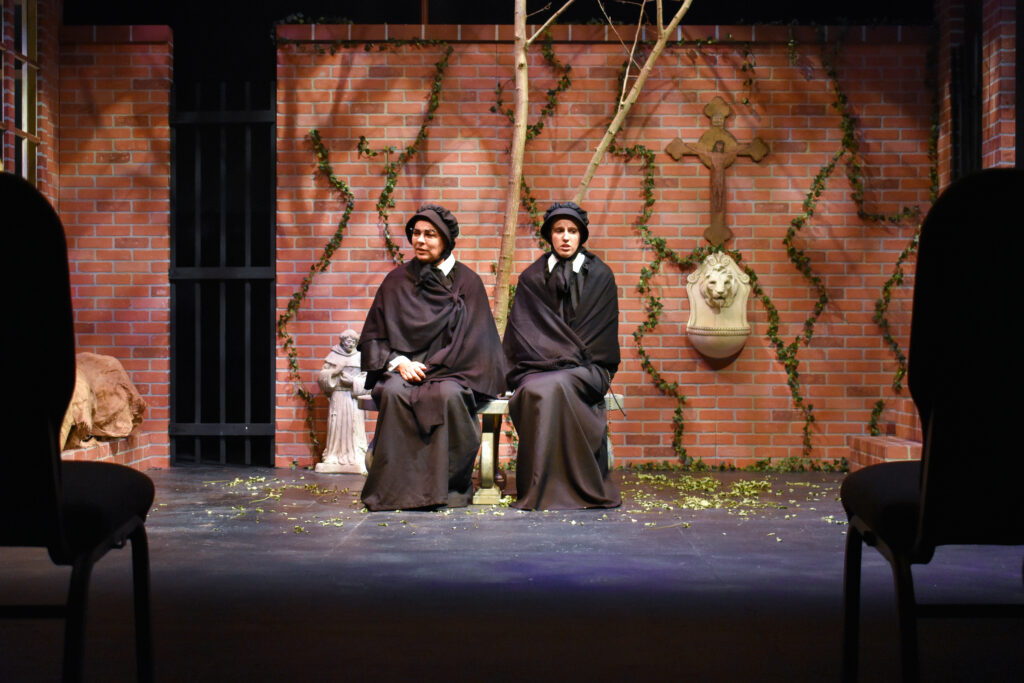 Live theatre: What are the benefits for those in the seats?

You have found your seat, a playbill is in hand, and the lights begin to dim. The experience — from the curtain rising to final bows — can provide benefits that can be taken back to reality.

The art of live theatre is more than just sitting in a seat and watching. Going to a theatrical performance can enhance or improve different parts, ideas and ways of a person.

Going to a live theatre show can also help better someone’s understanding of new concepts. This could be emotions, reactions and even situations that happen in real life.

In a Study Experiences article, Journalist Katie Colombus said, by watching live theatre, “We are transported into the hearts and minds of the characters, recognizing and understanding their actions and feelings which encourages communication and learning empathy, all within a constructed, safe environment.”

The show “Eurydice” comes to mind, because the audience is taken through the story of a girl learning the extent of her father’s love. Or a show like “Doubt: A Parable” comes to mind as we see a Catholic school principal try to prove the crime of a priest. Both of these stories are examples of how audiences can be transported into all kinds of situations.

The action on stage is presented in a developed fantasy world created by a director. Each audience member can gain their own interpretation.

Using the suspension of disbelief, the audience’s minds are open to creative and imaginative worlds that can be taken back to reality. When you see a show, you are submerged in a different world, but when the show is over, you can come back to your personal life.

Another benefit is that live theatre is immediate, evolving and always different.

Just like anything live, there can be many different outcomes. This helps audiences receive a different experience each show and gain excitement.

North Greenville University theatre Professor Amy Dunlap said, “Live theatre has an energy and presence that is missing from something recorded, there’s a contagious energy.” The contagious energy she is talking about describes how the audience is in watching a story unfold in real time and anything can happen.

With live theatre, you can better understand the society that surrounds the current worldly state.

Medium.com reports, “By witnessing different topics of injustice and discrimination in a theatre production directly in front of us, it is as if we were supporting an injustice and not intervening. This makes us thoughtful and directly affects our conscience.” The art of theatre makes society look itself in the mirror by putting social issues on a stage.

Think about it; sometimes a show can run 30 minutes to two hours. A large amount of focus is needed to watch and understand what is happening in a production.

In a theatrical production, the view is often directed up on the stage. In some cases, the focus may be directed to the left, right or behind. There are also multiple sound effects, actions from actors and words being spoken during a show. An audience member must be aware and ready for anything. Because if you miss a sound or action, there is no rewinding.

Being an audience member to a live theatre production also influences our character and how we think or react.

As an audience member, you are able to react to every movement, lighting cue, word and actor’s expressions. The reactions produce different emotions and feelings.

Throughout a live show, the audience is emersed in a world that can have grief, love, happiness and joy. These worlds can cause the audience to think and analyze the story playing out right in front of them. Seeing different characters on stage can also cause an audience member to look at one’s own self. In the audience, you can check the kind of person you are and what kind of character you are.

For example, you may see the memory play “The Glass Menagerie,” and you may end up reflecting on your own memories.

Watching a show can also help an audience think about plot, theme and even character development. You can understand stories and think about what makes a story come to life.

In an audience, you are seated in a room, big or small, and will most likely not be alone. There are other people around you in the rows and rows of seating. In those seats can be people of different backgrounds, ethnicities and social statuses. But all audience members are brought into a world together and by the end of a performance, have seen something unique.

Going to see a show can be an adventure. Some like to go see a production with family, friends, on a date or even with a school group. Not only do audience members go see a show to watch a story unfold, but some also go to support someone onstage.

Building community is all about supporting others, experiencing things together and willing to share space with other people that may not be just like yourself. Live theatre can do just that.

Audiences who witness live theatre can gain empathy for other perspectives.

In a show, you are shown humanity, psychology, motives, conflict and resolutions. Acting Studio Chicago reports, “We as the audience get to witness the trajectory of persons other than ourselves.”

“Elf! The Musical” is a good example of this. In the show, we see Buddy the elf go on his own journey to find his father in New York. In the process, we see buddy uplift many attitudes toward the meaning of Christmas. The audience is taken on this adventure with Buddy and his emotions.

Theatre shows the stories of characters that can be related to but can also show characters that some do not relate to. The audience can see a certain character on stage, and then can have an emotional reaction to what that character is going through.

Not every audience member is going to relate to every character on stage. But audiences can appreciate the stories of others. A live theatre production allows those in the seats to see characters on different walks of life but are able to follow and support a character until the curtain closes.